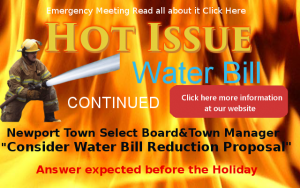 Dec 18th 2015…
At the Newport Town Vt SelectBoard Meeting Dec 3rd, 2015, there was discussion on recent water bill increase by 100%. The Select Board Chair, Steve Barrup told me (Barry Sahagian) to submit a proposal they would consider. After dealing with Steve Barrup on other occasions, I have found him to be less that reliable on his word. I am expecting to not be so illusive on this responding to the proposal that he quested as it is of importance to many of the town residents.

He promised to schedule an emergency SelectBoard meeting to respond to the proposal ASAP.
I will post his response or a lack of before Christmas.

You can view this by clicking the image above for a PDF or read text below. Would greatly appreciate any support in way the of comments… thank you

To Select Board and Town Manager of Newport Town
December 18th 2015
On Dec 3rd at the Newport Town Selectboard meeting, the subject of reducing the water bill was brought up in discussion by myself Barry Sahagian. Steve Barrup (Select board Chair) responded (video taped) that I should submit a proposal for a reduction of the water bill that the Select board would consider.
I, along with 140 other town water users, feel that the 100% water increase was unfair. The decision to employ this water increase, in my opinion, was done in haste with very little thought by the select board. This was made evident by a statement given by Steve Barrup when asked to justify the 100 percent increase at the Nov 7th Select board meeting. He said “we either raise the water bill or Shut the water off”.
So far, the town residents and myself have received no clear explanation on the justification of this increase, no clear plans to the fix the water problem of 18 years and gaining. It is time to investigate why this Select Board and Town manager have failed to solve these problems.
The town residents sought answers to these questions at the last two Select board meetings, Nov and Dec 2015
The response we got from the Select board and Town manager were long winded, confusing and complicated. This has ultimately left the residents more confused as to what the problem actually is, than before they asked the questions.
So now I ask only one question.. Are they doing the job?
This has prompted me to get answers… How? Look at the disbursements on the towns bank statements. Right on the bank statements, the disbursements will tell the whole story. Figures do not deceive, give excuses or procrastinate.
Per the the Public Records act (Federal and State Law) any documents of the town can be freely inspected and copied by the residents upon their request from the town manager.
This whole mess can be avoided by a couple of simple actions by our town officials.
PROPOSAL
Immedaitely reduce the Water/Sewer bill to 200 per Quarter, get to work and implement a solid working plan to fix this. Balance your budget and reduce excess non essentail expenditures to cover the deficiet that has been created from the almost two decades of the unsuccessful attempts to solve the water issue.
>>>>>>>>>>>>>>>>>>>>>>>>>>>>>>
The result of this action would restore the confidence of the towns people as well end the witchhunt of going through 6 years of your records to discover the real problems behind this.
Please consider this carefully…. In this season of giving, if you could plan an emergency meeting to vote on this as Steve Barrup promised to do, maybe we could provide a video press release to the residents before Christmas.
This would help to heal the wound the Select Board Inflicted on residents in the way of the extra 120.00 charged on the water bill in November which reduced residents Christmas budgets.
Let’s not forget the unhappy new year for the residents on fixed income and Social Security. If action is not taken I will make this my personal mission to remind the residents to carry these thoughts when they go to vote on the next Town Meeting voting/elections.

Please do the right thing..
Barry Sahagian
I will publish this on Monday evening, Website and Face Book, but would postpone should you plan the emergency meeting to happen before Christmas.

Also my apologies to Steve Barrup on my misinformation on the Public Records Act on “free photo copies” we argued
at the Nov 7th Select Board Meeting…. See attached email copy from Deputy Sec of State VT Chris Winters.