This turned out very well. It let’s you see what the new laws can accomplish… Even though they deny any wrong doing. It is not the final word. I can file in Superior court any time for one year from this date. I am sure I would not lose.. I asked for a very reasonable cure. The courts favor working things out.

They were being difficult as usual and the court will take notice right away should it ever go to trial.. I most likely will not take this any further. Their lawyer was probably hoping for a trial to make more money from them. A good lawyer would have advised just going for cure and getting it over with I am sure
So as you will see, I agreed to be patient and let them work this out.

At this point in time, I will be laying back. I will not be actively be involved in the water issue. It is up to the water committee from here out. The select board now knows the importance of complying with the open meeting laws and Public records act and consequences if they do not. I ask that the towns people to not be afraid to use these laws.

I do not know how active I will be on the website. I will be taking a break and then see how I feel after some rest. I do not want to think about how much work and hours I have put in for 4 months. All voluntary … I have fallen behind in a lot of other work and projects.

Do not become complacent, stand up to authority and learn your options to take action if necessary. Good luck
Barry Sahagian

Statement
In October of 2015, I received a notice for a 100% increase in the water bill from Newport Center Town Clerk , 30 day notice. It stated you could get more information by contacting the town clerk Denise Daigle. This I did, and she told me if I wanted more information I would have to attend the Nov 7, 2015 Select Board Meeting.

ON Nov 7th, 2015 I attended my very first Selectboard meeting in Newport Center VT. On the agenda was a Civil Engineer to speak on the water system problems the town was having. The resedents were anxious to hear these details after receiving a 100% water bill increase from 120 – 240 including myself.

Ernest Choquette, myself, my wife Jayne and two or three other residents were in attendance.

We were clearly not included in participation of this meeting. The Selectboard and Denise Daigle were discussing water solutions quietly among themselves. We could not hear what was going on. We were most interested because of the recent increase of the water bill. I interjected and asked who the speaker was, he was not introduced to the residents. We were excluded from this private executive session (first violation; Article 1 313 1(a).
The man’s name was Wayne Elliot and stopped immediately somewhat embarrassed and introduced himself. I then asked questions about some of what I saw drawn on the blackboard. Wayne began to explain and Steve interrupted him and told me. He can not talk to you now because it is costing you (the people taxpayers, 250 an hour to pay the engineer) . Am I not the part of people, a taxpayer in good standing up to date? Am I not entitled to participate in an open meeting?
2nd violation, 1 312 (h) persuant to 314 (a)
Later in the week after the meeting, I questioned Denise about the 250 an hour supposedly being paid to the Wayne Elliot (the civil water engineer on the agenda). Denise told me that Steve was only joking with the 250 per hour quote. I confronted Steve in a heated debate at the next Select board meeting with 30 residents present. I asked over and over “why did you lie to me” He finally responded by saying “I know now that I should not have said that. I only said that because it makes engineers and lawyers feel good when you tell them they charge a lot of money”. I thought this odd but was satisfied with his response and respect him for being honest on this. However we were denied the right to be included in an important issue, I as well as others who attended the meeting for.
Previous to this meeting I received a notice for a water increase, from jtown clerk. It stated you could get more information by contacting the town clerk Denise Denise Daigle. This I did and she told me if I wanted more information I would have to attend the Nov 7, 2015. To the date of this letter I have still not gotten a clear explanation for details for the increase. In particular the numbers that caused this. The expenses that Steve Barrup referenced to at the Select Board meeting Dec 3, 2015. This is on record video taped at that meeting.

Shortly after Wayne Elliot finished speaking to the select board. He left the meeting. At this time supposedly we (residents) were permitted to speak. Ernest raised his hand to be heard. Steve Barrup in a loud, very loud voice yelled “ERNEST SHUT UP” Steve went on spewing out more angry words something about revisiting previous disagreement they have had in past. He was not allowed to speak.
In my opinion, this was no less that bullying.
(violation 3 – 1 VSA 314 (a) 1 312 (h)
To the date of this letter I have still not gotten a clear explanation for details for the increase. In particular the numbers that caused this. The expenses that Steve Barrup referenced to at the Select Board meeting Dec 3, 2015. This is on record video taped at that meeting.

I would pursue this no further if the Selectboard would schedule a meeting to include Wayne Elliot of Aldridge/Elliot Associates some time within this month of February 2016 for two hours to speak to and answer questions form the town residents.
Please be advised should this simple request for cure be denied. I shall file in Orleans Superior court to be heard on this issue. Be forewarned I have substantial evidence in the way of several hours of Video recordings, text records and witnesses to the fact quoted above.

Below is a template form. You can click on this to enlarge. This will be posted a blank form will be posted on this website. Also please note. In order to include more information of this complaint, I chose to use attachments referenced on the form. You can view to the right of this doc. It is probably a better idea to try and fit everything on the form with out using attachment because best to keep complaints as short and simple as possible to make them easy to understand. As you can see I did not take my own advice. 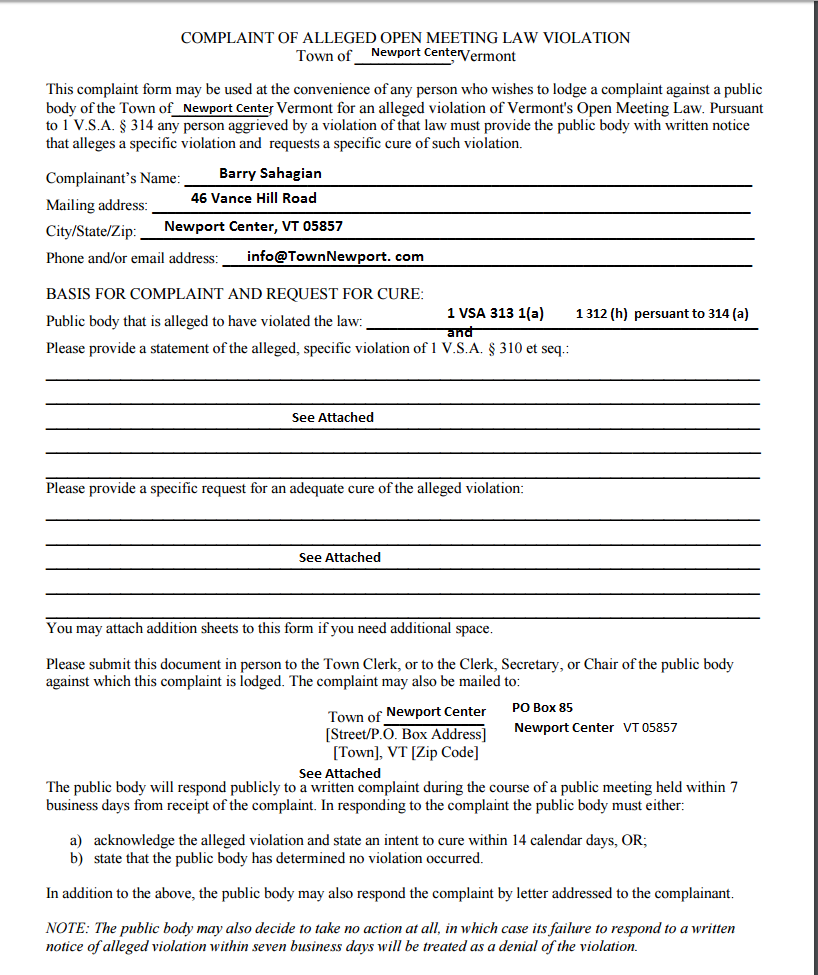 Once you Submit a complaint to your Town. They have 7 days to respond. A lack of response is considered a denial. They can also claim no wrong doing or they can agree to cure. If they agree to cure they have 14 days to do this. If they deny or do not respond, the next step would be to bring this to superior court. 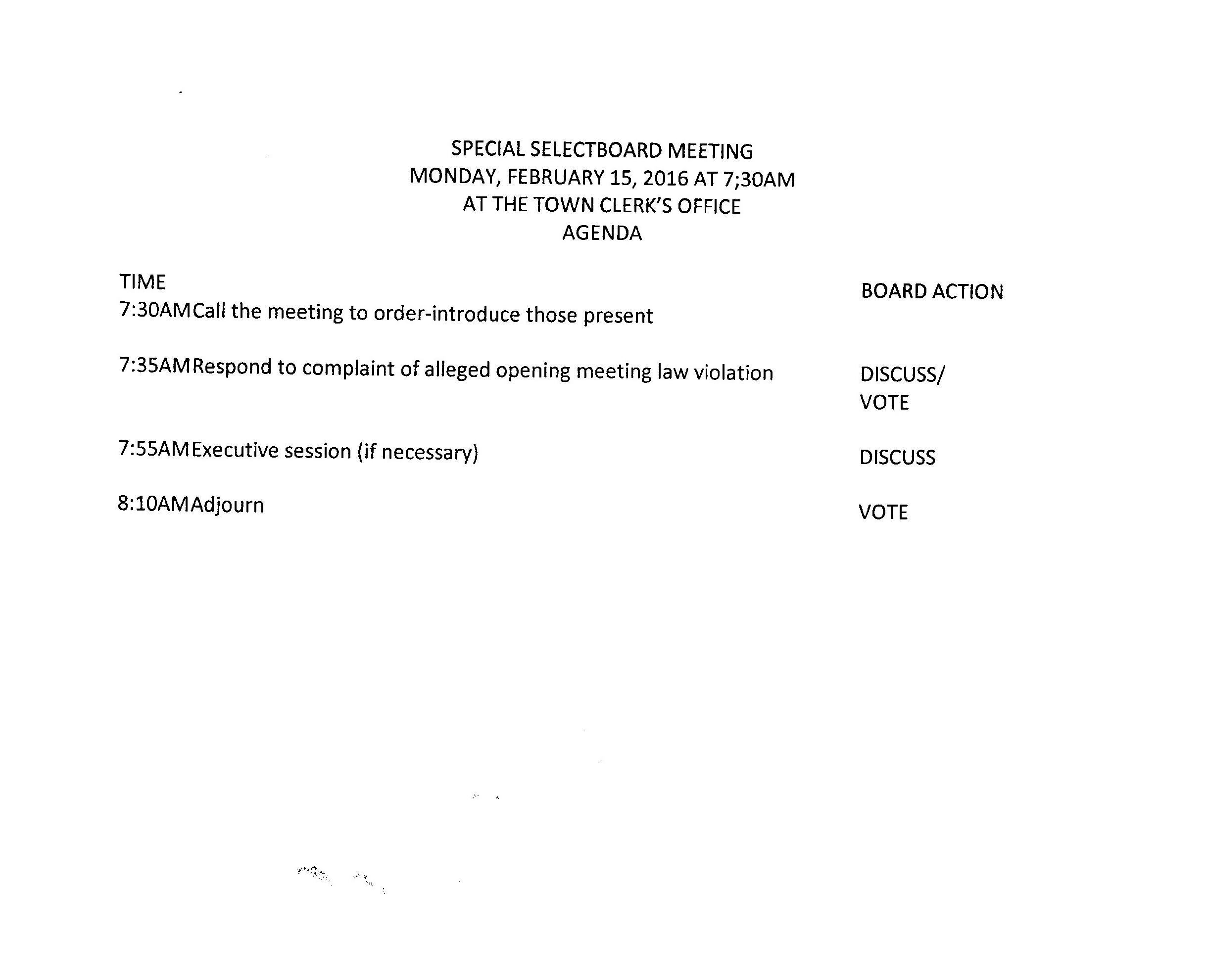