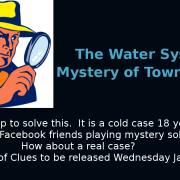 This is no joke. I have been collecting information on the details of our water crisis. Three months now and we are still in the dark. I will be releasing documents and videos and other evidence. The first set of clues and evidence will be published on Wed Eve Jan 20th.
Do you have what it takes to solve this mystery?

On Jan 7th, 2016 there was a Select Board Meeting discussion on a water crisis of Newport Town, VT. A Statement of Facts was presented at the meeting video below.. Below the video is an introduction and notes on the meeeting. Further down the page is the actual Statement of facts document. On the very Bottom you will find a comment section. We encourage you to add a comment…

So, one more Select Board meeting on January 7, 2016 and again well attended.

So ,at least two or three more enemies made by me and my husband. Unfortunately, this is what happens when you attempt to effect change. A couple of people made inflammatory comments to me and I reacted.

The meeting’s highlights were as follows:

`Vote and Rejection of Barry’s written proposal to Select Board members to reduce the water bill to $200.00

The Water Committee was FINALLY approved initiated by Gerry Waterman at Steve Barrup’s reluctance . The capable members (Ernest Choquette, Dennis Delabruere, Chris Donovan, etc. will make strides and hopefully initiate a solution(s) As well, maybe they will uncover some of the financial discrepancies in connection to these water issues that my husband has already seen and brought to attention of residents.

Barry Sahagian has put in countless hours of work in video, editing, procuring supporting documents, research, Facebook and Website all on a voluntary basis.
Like the rest of you, he must work for our living expenses including our excessive water bill. So, although there will be a few more videos forthcoming, the work will now be reduced to a minimum for time constraints..

The Townnewport.com t has now moved to another phase with the Water Committee and we all support their efforts.

Now, what can the residents do? Besides hidden Facebook comments allowing you to vent, Add comments below and let us know how you feel, you can vote out these Select Board members if you don’t want them in at the next Town Meeting in March 2016. You can vote out excessive donations and any expenditures you feel may be causing our taxes and water bills to continue to rise.

For those of you who support Barry’s efforts, we thank you. For those who do not, you are entitled to your opinion.

1.) Eighteen years no results. no solutions in sight, massive debt and huge increases to residents

Conclusion: So far the explanations of the water problem have been riddled with contradictions and confusing statements which makes me believe there is a level of incompetency of the Select board to deal with this problem.

Conclusion: Was this necessary to buy this amount of water? According to documents from the Civil water engineers and state planning the existing wells have the capacity to supply the 322 users of water in this town. See Videos #3/ (Video Three)

3.) One of the General Ledger Water Expenses 2015 a 100.00 disbursement was paid to Masse Poultry in November. water-expense-details/

Conclusion: What does a purchase of Poultry have to do with water expense?

4.) During the Select Board meeting of Dec 3rd, a resident spoke out at discussion of what the wells produce “Maybe you should tell them what they are producing now” Steve Barrup at first responded by saying “Don’t have that data, but”. He then made a second response of 19,000 gal at the same time Fred also responded with 23 or 24,000 gal. See Video 2 Video (2)

Conclusion: Who do you believe? I have learned to Expect contradictions from Steve Barrup most exclusively.

5.) In the 2011 “Water Source Preliminary Assesment Report” done by Elliot Aldridge (civil Engineers) contracted by the town. On Sec 4.1.1 “The current system does not have a reliable or up to date data on any of the existing wells” The report continues to state… Sec 1.2 “The town should purchase a Portable Waterwell Monitoring Device Approximately 1,000. ” This would accurately record this information. The Town did not purchase this equipment.

Conclusion: we must ask, how does the town determine there is a shortage of water to justify the purchase of nealy 500,000 in past few years. Do they use a dowser, pehaps or are they guessing.

6.) The 2011 Aldridge Elliot Report is a very detailed plan of 30 pages offereing dozens of solutions and alternatives to fix our water problem at a fraction of the cost spent on purchasing/ trucking water.

Conclusion: It appears the that select board after paying thousands to Aldridge Elliot to prepare the plan/report did not use this valuable advise and plans for 4 years.

7.) In Nov 2015 under the direction of Aldridge/Elliot and Construction by Manosh, a new well was constructed. The cost was 25,000. After the well was completed, the Select Board voted to use the new well only in case of emergency.

Conclusion: Do we not have an emergency now? We are spendng close to 100,000 per year on hauling and purchasing water driving the town further in debt currently at -350,000. Quoting Steve Barrup on Dec 3rd on this issue ” If the town goes Bankrupt, the resients will be responsible to pay the debt” . The Select Board takes no responsibility in creating the debt by the actions of voting in and signing checks to non essential water system purchases such as water hauling and purchase. Donations to Goodrich Library, Solar Farm and many more

8). There are 4 wells capable of producing water “marginally enough to supply the town” (according to Elliot Eldridge Water Engineers) The well 1993 and the two lower wells on Vance hill. They need bits of maintenance/up grades like water boiling Quoted at 47,000. This relatively small amount to initiate a permanent fix was discouraged at the Dec 3rd Select Board Meeting by Steve Barrup when the residents suggested the Select board should take this step. Steve Barrup Responded ” I could do this but it will cost you 47,000″. A resident yelled out “DO IT” which was ignored by the Select Board SEE https://townnewport.com/videos/

9). On Dec 3rd Select Board meeting , while a very serious Ernest Choqutte was proposing solutions to the water problem,
Steve Barrup stated “I would love to take this whole thing and just give it to somebody else”

10. The Select board at this time is predicting it will take 3 more years in which time they will borrow more money and drill more wells in spite of the fact the engineering firm Elliot/Aldridge who they are paying to work on the system say ” the 4 existing wells can marginally meet the demands of the town ” They have also outlined numerous well conceived plans at reasonable cost. The select board has not taken any of the suggested steps Until Nov 2015.